Ever-consuming-insanity! Nothing better than politics, slanted media, chaotic violence, finger-pointing accusations, and your everyday, run-o’-the-mill mayhem to motivate us all to get out of bed and dive in to the day-to-day fun!!

Now that all the gloom and doom has been thrust out front, I want to dial it back and focus on something even more important:  Flossing!

Turns out, per a recent article by the writer Catherine Saint Louis in the New York Times (Aug 2, 2016), that the “… latest dietary guidelines for Americans, issued by the Departments of Agriculture and Health and Human Services, quietly dropped any mention of flossing without notice. This week, The Associated Press reported that officials had never researched the effectiveness of regular flossing, as required, before cajoling Americans to do it.”

Well then. Just that part right there has put all the brakes onto my crusades for Common Sense and setting the world back straight! How can I take another step forward with this new knowledge in front of me? After all the years, (and, yes, very few visits to the dentist), of “cajoling” by dentists to floss, I started religiously flossing about a year ago. Actually, it has almost become an obsession. Actually, if I can’t find my Plackers Micro-Mint Dental Flossers, I start envisioning revolution on a global scale!  What have I become, and is it all for naught? UGH!!!

It’s one thing to cruise through this world having to constantly watch for the oncoming idiots, morons, and dummies day-to-day, but now we are having our trust in the ‘experts’ crumble before our very eyes! Trust is a needed commodity to survive in today’s world, and when that trust is ruined…well, it almost feels like you are now leaping out of a plane without a parachute! (Exception taken with the crazy guy and his recent jump into a net!)

Remember the old line “I have trust issues because of raisins in cookies, looking like chocolate chips!”? Well, now I can add dental floss to that mix! It’s bad enough that trust of government and other tyrannical officials has long been shattered…but to lose faith in dentistry? We are quickly becoming moribund! Sliding down the slippery slope to doom!

The question remains: What do we do with this new knowledge? Do we wait it out and hope that some bright group comes along with a study to say “hold on folks, turns out that we really do need to floss”?  Are we prepared to run into battle and get the “truth” from all the doctors and dentists who tell us ‘an apple a day…’? Do we just roll over and give up? And, if we do give up, what is to become of the dental floss industry? The jobs, the people, the floss?

I, for one, do intend to continue on with my zeal for the floss. Studied, or not…I have found ample evidence within my mouth that supports the program of flossing! After all, what is the alternative? Carry parts of previous meals with you throughout the day? I might not be in the mood for a piece of onion to dislodge whilst enjoying a delicious piece of pie! Nor am I a fan of flashing a smile and sharing the menu of my earlier consumables! Let’s face it, removing the evidence of breakfast before a conversation allows us to focus on the discussion better…rather than doing tongue-yoga trying to manipulate some food remnant discreetly.

To each their own!  But, I do declare this to be a matter more pressing than whether some reality television person humped this or said that. I’d much rather know if our government officials conducted their talks while tongue-hunting a piece of bacon stuck between a couple of molars! And, if they were, why didn’t they get the string out and remove it? Did they stop just because there hasn’t been any “official” studies done?  Maybe there is a tie-in to Common Sense here.

Perhaps we have become too dependent on ‘officials’ telling us what we should and shouldn’t do.  Maybe we need to break free of the bonds and think for ourselves. To think outside the directives given to us by the powers that be might actually lead us to strengthening our knowledge! Not that we can all become scientists and doctors and dentists…but to be able to stand on our own two feet when the experts are wrong!

That doesn’t mean we remove all the warning labels just yet….the earth population would drop exponentially! Let’s face it…there exists stupid out there! This needs to be a slow, educational process. After-all, the dumbing down of people didn’t happen overnight! It’s taken decades of manipulation, subliminal advertising, and threats to health and welfare to get to this point! But, we really are not that stupid that we need to have our hands held by big brother everyday!

Let’s stand, remove the blinders, look at the light, think, and, above all, FLOSS!

(Disclaimer: The author is not, nor has never been, affiliated with any dentistry organization and/or oral hygiene company/manufacturer. So, settle down! I’m not getting a dime out of this blazing endorsement of Plackers or any sort of flossing materials!) 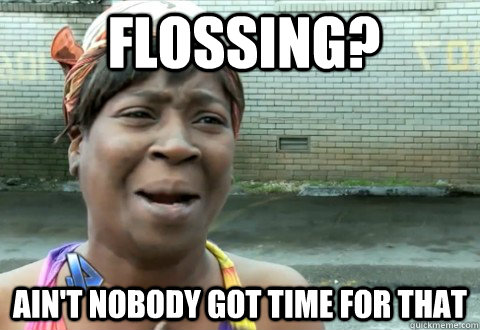