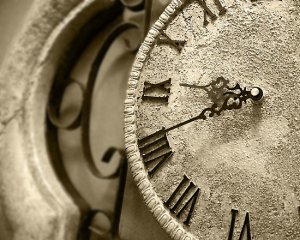 “Because that’s the way it has always been done!” That’s the answer for tradition. If you do the same thing time and time again…it’s tradition. The family gatherings during the holiday, the placement of an item ceremoniously, following a well-travelled path…all traditions. There are many wonderful things to be said about tradition. It can be used as a means of preserving family memories. It demonstrates respect for the past. It also teaches and motivates the young to remember. Tradition can build a strong bond of unity!

There can be down-sides to traditions though. Often, doing something just because of tradition makes it robotic and the true meaning to its purpose is lost over time. People will go through the motions “just because” and get stuck in the rut. Traditions can keep you trapped, missing out on something that can be new and exciting. “Because that’s the way it has always been done!”

I did that once. Absolutely refused to purchase compact disks for the longest time because I felt my tradition of records and cassettes were being infringed upon. Don’t tell me I have to change my media! I’ve always listened to my music this way!

With some traditions though, I have to shake my head and wonder why.  One such tradition is using Roman numerals for the year or to denote a quantitative measure of events. Prime example: the Superbowl. This 2012, Superbowl XLVI was played. Not 46, but XLVI. It is important to note that!  But why use Roman numerals? Doesn’t our numbering symbols work? Does a game or event become more exciting if antiquated symbols are used?

If you put in the question “why does the Superbowl use Roman numerals” in Google search, you get about a thousand pages of every type trying to give you an answer. And you know what? None of them do. Well, maybe they do, but I’m not going to scroll through every one to see!  But, the common thread seems to be tradition. Plain and simple. It’s the novelty of doing it because, well…just because.  Tradition. 1966 saw the first game played, billed as Superbowl I, and has continued tradition ever since.  They are not the only ones using Roman numerals though. Check out the very end of the credits on television shows. Copyright MCMVXXIII (just made up a random number). Tradition? Yep….tradition.

Let’s face it…the way of the Roman numbering symbols is a thing of the past, but to strike tradition, we continue to use it in various applications. The same can be said of many traditions. Archaic as some things may seem, we still push for some aspect of yester-yore.  Is it a bad thing? No. Something like Roman numerals will not decimate the rise of technology. But if we held fast to a Roman numeral-only mentality, then hinderance of progression may occur!

Standing in traditions that disallow progress have also proven to be damaging. In many cultures or religions, some traditions have proven harmful to certain genders or races. Women have suffered throughout history under religious or political oppressions. Having a belief other than the status quo could often be cause for punishment or death to people because tradition would not move…it’s the way it has always been and it will not be challenged!  These types of situations still happen in this modern-day and age! Archaic thinking creates a separation.

I’m not going to start in on specifics. That usually just leads to arguments. I’m not here for that.  I just feel that it is important to keep a mind open, evaluate all aspects, and be respectful to other’s. Disclaimer: driving like a selfish idiot during rush hour is NOT considered tradition! Just saying….but I digress!

Anyway, I just find it interesting some of the various traditions that people, communities, cultures, religions, and even nations will hold near and dear to their hearts. Look around your world this week and note the various traditions that people engage in. You will find some odd, like Roman numerals. You will find some touching, like visits to a grave. You may find some that need a change. You might find a situation to create one. Sometimes you have to break tradition to create a new tradition!

No matter the tradition, it is something that is a part of the life around us. I hold out for hope in a planet steeped in traditions that a sprinkling of common sense exists within!  Change can be good for some traditions. I know…I ended up buying a CD player and learned to really enjoy that technology!

Now, what is this MP3 stuff I’m hearing about….?